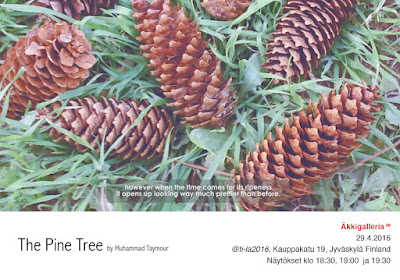 In April 2015, Äkkigalleria presented Kevät Egyptistä (Äkki 32) showing new work by 11, young Egyptian artists. The film-maker and video artist Muhammad Taymour, collected video documentation material for a future film during his visit to Jyväskylä at this time.
Exactly one year later, this short film is complete and we will show it for the very first time publicly in Äkkigalleria 38!

Synopsis
Finland is a very beautiful country but it will never show you the real beauty easily. Only those strangers who can cross the hypothetical boarders and break the imaginary fences of the country will be able to see this beauty within, other than that you have to be a Finnish citizen.

Welcome to the screenings of The Pine Tree by Muhammad Taymour
Äkkigalleria 38 (@ti-la2016)
Kauppakatu 19, Jyväskylä

Muhammad Taymour is an Egyptian Artist born in 1985. He became interested in Photography when
he was 22 years old, and his work is influenced by Abstract, Surreal & Conceptual Art.
His interest turned gradually to filmmaking & video art to express his thoughts in a better way.
As a Director & Video Editor, Muhammad seeks creative approaches for story telling and never gives up in his search for perfection.