In closure of the year 2015, Äkkigalleria brings you one last event : the short film "Kaamos" by Katie Goodwin.
This event will take place in the ti-la2016 space on Thursday the 17th of December at 5pm and 7pm.
After each viewing, Äkkigalleria organizers will lead an open discussion accompanied by glögi and festive munchies.
The duration of the film is about 30 minutes.
The event is free of charge, but bcause there is limited space in ti-la2016, please reserve your seat at (akkigalleria (at) gmail (dot) com) 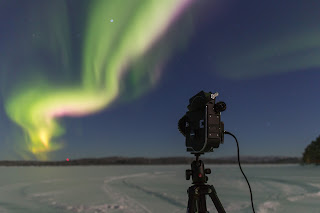 Kaamos
Kaamos was filmed on 16mm by London based artist Katie Goodwin whilst she was on a HIAP residency on Suomenlinna Island for 3 months over the winter of 2014-15.
Kaamos explores the struggle between a modern urban life and an inherent need to connect with nature. The film weaves together a series of darker moments with lighter observations on cultural difference unwinding a tale of a turbulently psychological experience. The second part follows the artist to Lapland to experience the Kaamos. As if in respite for the lack of sun, the Aurora Borealis appears.
The minimalist soundtrack was made in collaboration with Lappi sound artist Janne Similä, who accompanied Goodwin for part of the filming.
Kaamos and the HIAP residency were funded by the Australian Council for the Arts and British Council/Art Council England’s International Aritst Development Fund.

About the Artist
Katie Goodwin is a London-based artist (UK/AUS) and graduate of Goldsmiths and Wimbledon College of Art. She has previously exhibited in galleries and film festivals worldwide, including Tate Modern, ICA & Barbican in London; Site gallery & S1 Artspace, Sheffield, UK; CAST, Hobart & MADA gallery, Melbourne, Australia and National Museum, Trinidad and Tobago. Her first solo show at ArtLacuna, London in 2013 screened the Wellcome Trust funded film Small Wonders,
nominated for Best Documentary at London Short Film Festival in 2015. She has had several solo screenings and exhibitions in 2015 including at Temporary Arts Project, Southend and Bohunk
Institute, Nottingham, both UK and Gallery Augusta, Suomenlinna. Other previous residencies include at Tyneside Cinema in Newcastle Upon Tyne, 2011 and a second Finnish trip to AARK, Korpo in summer 2015.