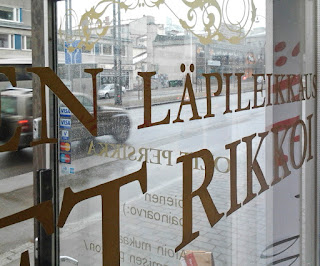 view of the installation by Maria Teeri and Janne Nabb

Äkkigalleria 18 presents Janne Nabb and Maria Teeri an artist couple based in Helsinki. Janne and Maria are Äkkigalleria’s sixth artists in residency, and will be in Jyväskylä for our shortest residency yet: seven days. An ingenious pair of young artists, specialized in an array of mediums and disciplines will now spend one week outside of their studio to create something new and unexpected. The artists have been systematically working together for over three years. Last summer, their work was part of the Mänttä Taideviikot at Pekkilo and currently they are showing in the Reality Bites exhibition in the Museum of Contempoary Art Kiasma.
Äkkigalleria 18 will show a new installation of work by Janne Nabb and Maria Teeri. The work for this installation will be made exclusively in Jyväskylä for the Äkkigalleria 18 exhibition. Everything will therefore be made within one week’s time. We hope that this added pressure will spur the artists into producing work which challenges their routine in creation.

This residency is in dialogue with last year’s spring residency by the drawing duet Camille Girard and Paul Brunet, who also produce their work together.  However, because Nabb and Teeri are of Finnish origin, they will not need to spend time/energy on culture shock and observation in same way as many of our foreign residency artists. This will allow the artists a more intense creation period to produce work which focuses on the moment of now.

The opening will take place on Friday the 12th of April from 5 - 7pm.
No comments:

Äkkigalleria 18 will be a one-week artist residency in early April 2013. Two Finnish artists will be participating in this residency.