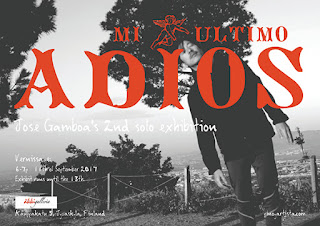 The opening will be held on Monday the 11th of September at 6–7pm.

This exhibition takes place in the same locale as the 100 Finnish Photographers project (Äkki45) which will be ongoing before, after and throughout this interlude exhibition. The 100 Finnish Photographers projections will be visible during the dark hours of the evening, night and morning, and the exhibition by Jose Gamboa will be open during the bright hours of the day from 10am –5pm, on Tuesday the 12th and Wednesday the 13th of September.

The exhibition is free of charge and open to the public.
Welcome.

Jose Rizal is the national hero of the Philippines. He was sentenced to death by firing squad by the Spanish empire for exposing the injustices of the Spanish in the Philippines during their colonization of the archipelago for nearly four hundred years. He wrote “Mi Ultimo Adios” (My Final Farewell) the night before his execution by firing squad. It was his farewell to his family, friends, his country, his life. The poem had to be smuggled out of prison in a lamp.Nearly three years ago I said farewell to my loved ones and my country to try to make a life for myself in Barcelona, Spain. During that time I have experienced a little of what it is like to be an OFW (overseas foreign worker, who make up nearly 40% of the Philippines' GDP, and Barcelona has 30,000 registered Filipino immigrants), a tourist (Barcelona is full of them), and at times, as an undocumented immigrant, without any security or address, without any chance of becoming part of the Europe that I had traveled so far, invested and given up so much for.

The exhibition consists of the lines from the poem "Mi Ultimo Adios" printed on posters I've collected from the streets of Barcelona over the course of 24 months. These were created at Ratamo during a 3-week artist residency."

Jose Gamboa is a visual artist, comic & storybook illustrator, writer and teacher from Manila, Philippines. He is currently artist in residency at the Ratamo Centre for Printmaking.
pinoyartista.com