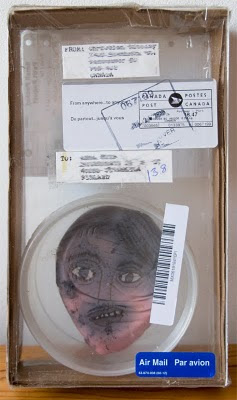 After almost one year of existence, Äkkigalleria is organizing its first artist residency. Christian Nicolay from Vancouver, Canada and Roy Hopiavuori from Helsinki, Finland will be arriving in Jyväskylä on the 20th of August. The two artists, who will be meeting for the first time upon their arrival, will spend about 10 days creating Äkkigalleria’s 5th exhibition insitu.

Nicolay is interested in sound and process based performance. Experimentation and exploration are important tools in his artistic practice, which is not bound by any one medium. Hopiavuori, on the other hand, is a painter. His expressive, monochromatic painting is calmed by stencils and symbols which remind us of our own mortality.

Although politics are not the focus of their work, both Nicolay and Hopiavuori often make art with a politically critical slant. Their creations routinely express a social unrest, and discomfort, with current political choices. Nicolay’s installations have notably referenced the imbalance of wealth and social wellbeing using and defacing real currency. While Hopiavuori’s paintings hint at an ever present societal violence and the abuse of governmental power. The United States of America, and the United Nations, among others, are alluded to, in both Nicolay’s and Hopiavuori’s practices.

The choice, of content, style and theme of this Äkkigalleria5 exhibition, has been fully given to the artists themselves. Nicolay has sent some raw artwork through international post to be incorporated into his installation, and Hopiavuori also intends to bring elements, for his final creation, from his home in Helsinki. The completed exhibition will be made for and within the Äkkigalleria space with new, unexpected and last minute creations.

The Äkkigalleria artist residency along with the Äkkigalleria5 exhibition will be held in what was previously the Jyväskylän Tanssiopisto on Cygnaeuksenkatu. The exhibition will be open to the public for four days at the beginning of September. The opening will be held on Thursday the 2nd of September. The gallery will be open from 1pm until 7pm and is free of charge.